ISAO's Iroha Nekomura was released as part of the second Starter Pack in the June 2011 edition of Windows 100%.

Iroha Nekomura is copyrighted by Sanrio. Model may be edited through permission by ISAO, but the character must remain the same.

Notice : Having permission by the model's author is always favored when editing. 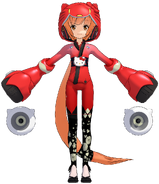 Alternate model with Iroha and her speakers.
Add a photo to this gallery

This article is a stub. You can help MikuMikuDance Wiki by expanding it.

Retrieved from "https://mikumikudance.fandom.com/wiki/Iroha_Nekomura_(Isao)?oldid=33000"
Community content is available under CC-BY-SA unless otherwise noted.